The second part of our interview with Will Kymlicka was focused on animal „foreigners“ in the wilderness, sovereignty rights and their pre-conditions, natural harms and predation, small-scale help vs. large-scale “humanitarian intervention”, and the dangers of human control and micro-management. Kymlicka argues that wild animal populations should be considered as sovereign nations. He acknowledges, though, that a strong case for sovereignty rights necessitates a sufficient ability to self-govern. Do wild animal populations possess it – or should they rather be viewed as „failed states“ that might generate duties to „humanitarian intervention“?

This question is crucial because depending on how we answer it, we are likely to reach very different conclusions on the matter of large-scale intervention in nature. In what follows, we will present three crucial questions in the intervention debate (as sketched in the interview), and suggest a few important considerations that are relevant to answering them and seem to point in the direction of intervention.

(1) What’s the fact of the matter about how good/bad the situation of wild populations really is? „Successful state“ or „failed state“?

When we think of wild animals, we tend to imagine cases of animals that probably have comparatively good lives and are thus not representative. These are K-selected animals, i.e. species with few offspring that are taken good care of. By contrast, r-selected species bet on the numbers and have many more offspring than will survive to adulthood. If populations remain roughly stable, then only one child can survive per parent – but r-selected species have dozens, hundreds, thousands or even millions of offspring during their lives, implying that most of them will struggle over the way-too-scarce resources and die gruesome deaths very shortly after birth. 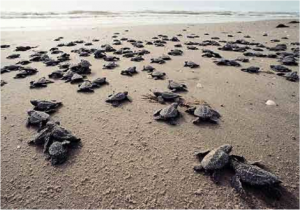 This significantly raises the probability that the answer to the crucial question (1) will mainly turn on the number of r-selected animals (relative to the number of animals with better lives), other considerations being comparatively insignificant.

In his paper „Debunking the idyllic view of natural processes„, ethicist Oscar Horta considers how reproductive strategies affect the ethical (dis)value present in nature and writes:

The mere fact that there are individuals who have to undergo such terrible lives will be in itself something highly disvaluable for a number of theories in axiology and ethics, such as egalitarianism, sufficientarianism, prioritarianism and those views which accept some form of maximin principle. However, there is more to say here. The magnitude of the disvalue that r-selection causes is significantly raised by the fact that this situation is not merely suffered by some individuals every now and then. The fact is that the overwhelming majority of the sentient beings who come to existence have to endure this fate. There are two reasons for this: (…)

Horta argues that almost all wild animal individuals die shortly after birth. If that’s true, then characterizing essentially the whole of wilderness as a „chronically failed state“ would likely be appropriate, and the argument for sovereignty rights would prima facie be very weak for the whole of wilderness. K-selected animals could possess the ability to self-govern to a sufficient degree and thus be an exception, but they seem to form only a small minority.

(2) If we were to try and intervene in nature for the better, what are our chances of actually improving the situation vs. making it even worse?

One important consideration here is that if almost 100% of wild individuals die gruesome deaths shortly after birth, it’s probably hard to make their situation worse. But even if there were a significant risk of making the situation significantly worse, we’d have to compare this outcome to the counterfactual alternative, i.e. to doing nothing and having a certain large-scale catastrophe go on indefinitely. If this is roughly correct, then the probability seems quite high that it would be difficult to block an argument for systematic intervention on the empirical grounds that (2) brings up.

(3) How (non-)consequentialist should we be?

Across a wide variety of axiologies, there seems to be a prima facie case for saying that the existence of current wild populations contains a huge amount of badness and may well be significantly net bad. If that’s correct, it would be a good thing to radically modify them for the better or even to prevent their existence. But we probably could not do this (i.e. helping wild animals massively overall) without also harming some of them in the process. Given the magnitude of the catastrophe we want to prevent, though, only a very strong form of non-consequentialism could block the argument for intervention on the normative grounds that (3) refers to. The Trolley Cases isolate what seem to be some important building blocks of the humanitarian intervention case (namely, helping with collateral damage or through instrumentalization): If we pull the switch in the standard trolley case – as most people do –, then the collateral damage that would result from our intervention would be acceptable as the (very probably) lesser evil. What may be impermissible is harming some animals as a causally necessary means of helping many more – if we follow most people’s intuition about the „fat man on the bridge“ case (to the extent that this intuition does indeed stem from concerns about instrumentalization). Or would this intuition break down if we were to take it to the extreme and add hundreds, thousands or millions of potential victims that we could save by pushing the fat man down? And could it be argued that empirically, the wilderness confronts us with such an extreme case? But maybe allowing for (sufficiently restricted) collateral damage would be enough and the fat man case could be ignored here. – Also, considering the human analogy should be instructive: What if we were confronted with an astronomical population of humans where the overwhelming majority of individuals died gruesome deaths shortly after birth and where our intervention was the only chance of improving the situation?